Patta has been a key player in the sneaker game for decades. Since its inception 17 years ago, the brand has established itself as one of the main influential brands to incorporate cultural influence into the streetwear community. With many original streetwear brands taken over by conglomerates and developing into large-scale commercial enterprises, Patta has remained true to its roots, keeping the black-owned business fully independent.

The collaborative efforts between companies like Nike and New Balance with the Amsterdam-based brand serve to highlight Patta’s emphasis on culture and youth empowerment. Patta got love for all, and we all love Patta. 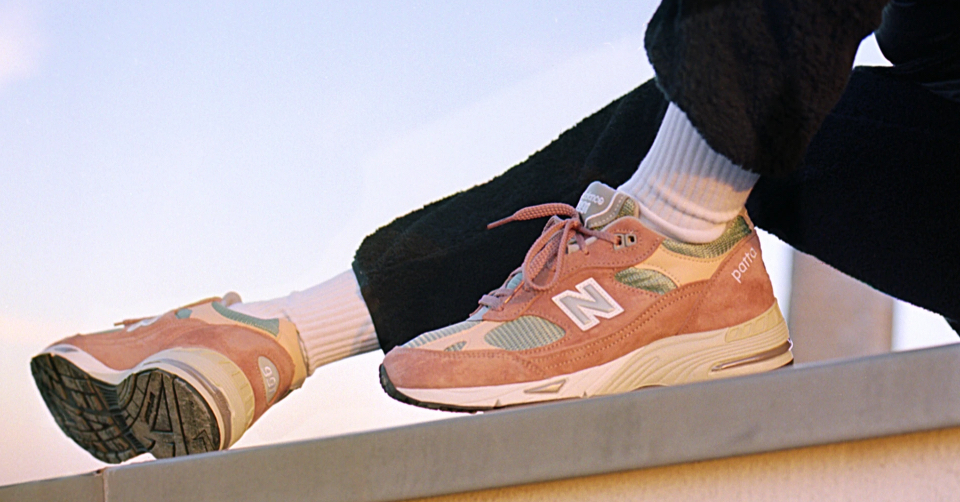 12 years after the extremely successful and coveted Patta x Nike Air Max 1 Chlorophyll Green – a grail to many sneakerheads – the brand has once again reunited with Nike to release a set of four Air Max 1 silhouettes. With the silhouette celebrating its 35th anniversary and a general trend evolving towards a comeback of the beautiful sneaker, the release is more appropriate than ever. 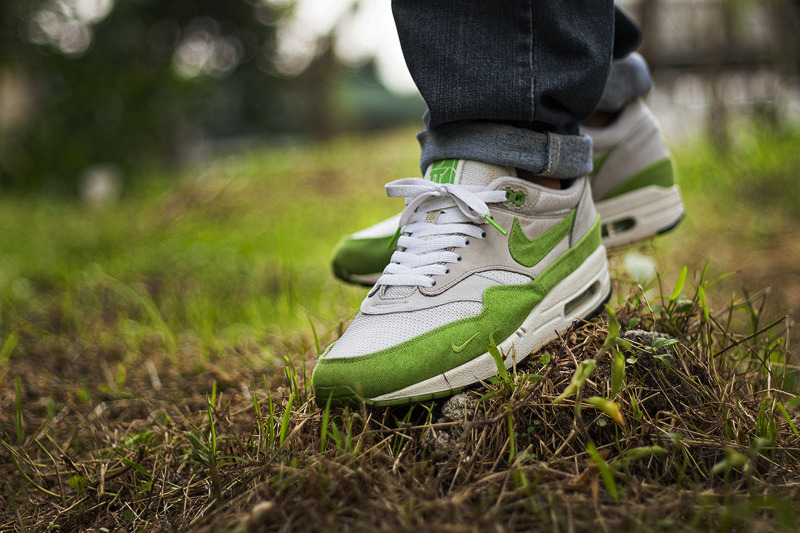 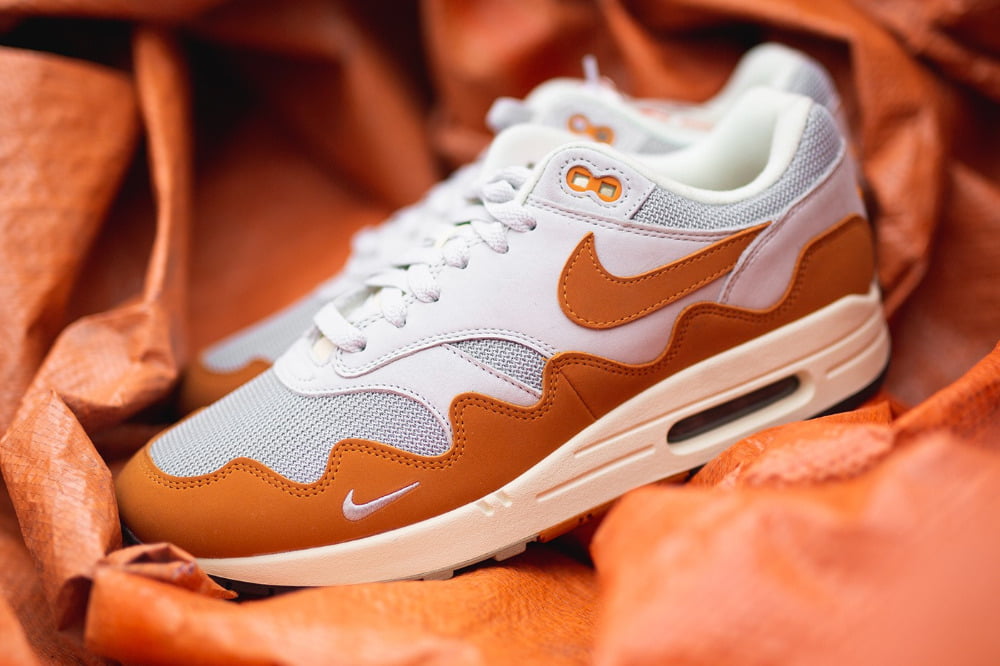 The orange “Monarch” colorway was the first edition of the Nike x Patta partnership to drop in early October. Three weeks later, the blue “Noise Aqua” edition was added to the line-up. In-store releases showed a good illustration of the sneakers’ demand, with hundreds of fans lining up hours before the release, crowding the streets and even causing some police involvement. Demand for raffles was out-of-this world, and low stock numbers made it really challenging for most fans to cop. Patta was even forced to restructure the Noise Aqua release to avoid further neighborhood complaints. At the time of writing, little is known about the remaining two colorways. However, we can expect the two collaborators to follow suit with their previous sneak-peek of the “Noise Aqua” version in the official product image’s top-left corner, implying that the next iteration will feature a striking dark pink. 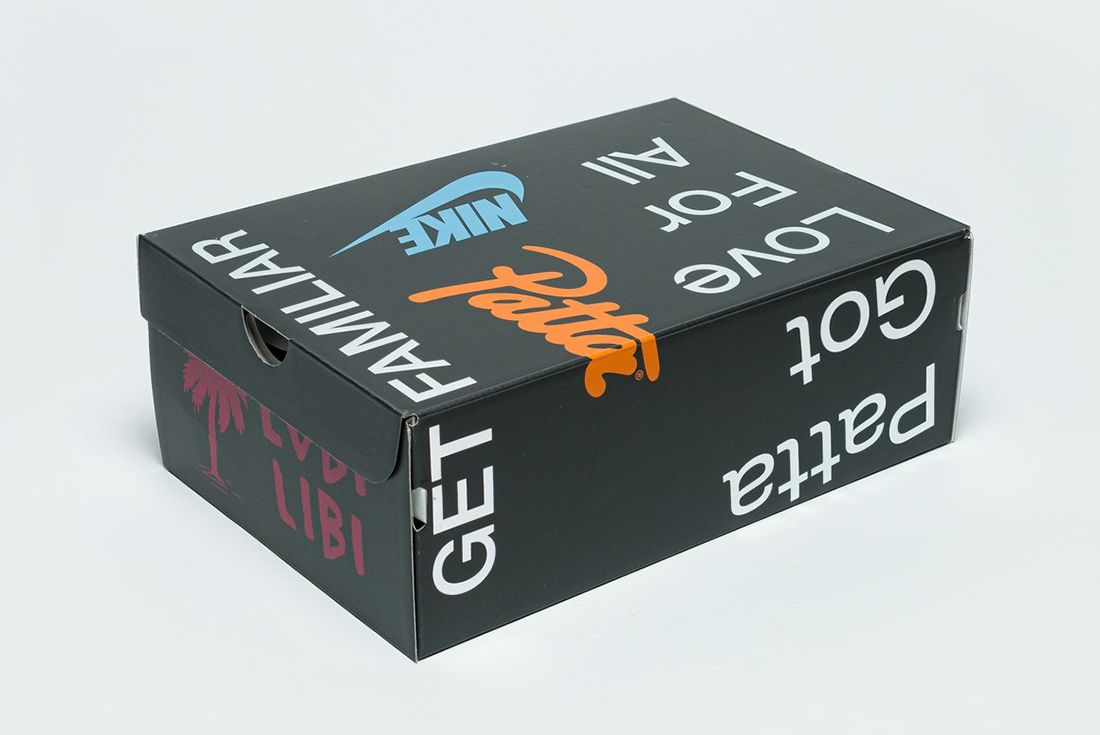 A different source of information could be the custom shoebox that accompany the sneaker. The Patta logo is Monarch-orange, the Nike logo features the Noisy Aqua-blue, and the "Lobo Libi" (translated to Love Life) on the rear of the box is dressed in a similar dark-pink as the anticipated third version.

This would imply two alternatives: either there will only be three sneakers released in total, with the dark-pink marking the end of the collaboration – or the fourth sneaker will feature a silver metallic look, representing the rest of the text on the box.

What we do know is that demand will certainly not drop with the next releases, so keep your eyes open for new information! If you’re interested in copping one (or both) of the two sneakers, but cannot decide which one, or you generally need some convincing of what makes this sneaker so special, we got you covered! A hands-on, in-depth comparison of these two pieces of art. While at first glance, the sneaker might seem like a regular Air Max 1, Patta switched up some features, added details and encapsulated their rich culture into the sneaker’s overall look.

The most striking design feature is the jagged wavy mudguard that replaces the traditional smooth cut. “Waves not Cycles” is the main slogan of the entire campaign, emphasising the aim to drive positive change for the entire community, instead of constantly reiterating the same lifestyle. A symbolic masterpiece with a flawless implementation. The mudguard strongly sets the shoe apart from regular Air Max 1’s, while still maintaining its full identity and aesthetic pleasure. Other details include a premium white stitched mini-Swoosh at the toe-area, a mesh toe box and subtle Patta branding on the tongue and (not so subtle) insole.

While the Noise Aqua is arguably the easier and more wearable colorway, there is something about the Monarch orange that represents Patta and its Dutch heritage, once again highlighting priorities to stay true to the roots. With Patta’s love for details, there is more to the purchase than just the sneaker. A special co-branded custom box includes a silver-plated charm bracelet with acknowledges the brand’s Surinamese heritage and its long-term partnership with Nike. In times before influential rappers would unanimously decide which sneakers the crowd would wear, comfort played a much larger role in determining the success of a sneaker. This marks one of the reasons for the Air Max 1’s immense success. Besides being an aesthetic sneaker, the shoe was initially designed by Tinker Hatfield to provide maximal comfort for the wearer.

The Patta x Nike Air Max 1 is ideal for everyday wear, with a sturdy, yet cushioning midsole that extracts the most out of the Air Bubble to keep you comfy all day. Let’s face it. Buying a Nike sneaker always bears some risk in terms of qualitative finish.

Excess glue, insufficient stitching, leather perforations, colour-fade – we have seen it all.

With the collaboration only releasing a few weeks ago, determining the long-term quality is difficult, but after a few weeks of wear-and-tear, I can confidently conclude that the quality succeeds that of any Dunk Low I have had in hand so far. Leather is top-notch, the mesh upper provides breathability and prevents easy tears, the stitching is flawless, no excess glue visible.

Keep in mind that this is also not self-evident. A great example is the tripartite Air Max 1 “Lemonade” that released earlier this year, with fans in absolute dismay as a result of the easy crease and poor finish. Patta’s influence seems to have dominated Nike’s eye for low-cost priorities and convinced the sportswear giant to put in some more effort. The Nike x Patta Air Max 1 Monarch and Noise Aqua are both incredible shoes and sure contenders of sneakers of the year. Not only in terms of design, but in terms of heritage, symbolism, culture and spirit. Quality and comfort is top-notch, setting the sneakers apart from commercial hype shoes.

Personally, the Monarch sits closer to my heart. As mentioned, the Noise Aqua is potentially objectively more aesthetic, and certainly easier to wear, but there is something about that Monarch orange that has caught my eye since day one, and the more I see the sneaker, the more I fall in love with it.

What do you think? Did Patta hit or miss? Which of the two do you prefer? Let us know in the comments below.