If you’re planning to buy a classic Jordan 1, Dunk, or Yeezy 350, you’ve come to the right place at Drip Drops. We ensure that you can get your hands on essentially every hyped sneaker on the market. However, we also try to cater as much as possible for those looking to buy their ultimate grails, fulfilling their long-waiting wish list of finally buying that one shoe they’ve been hunting down for months, even years.

As a guide, we’ll round off the top 5 grails available at Drip Drops today! 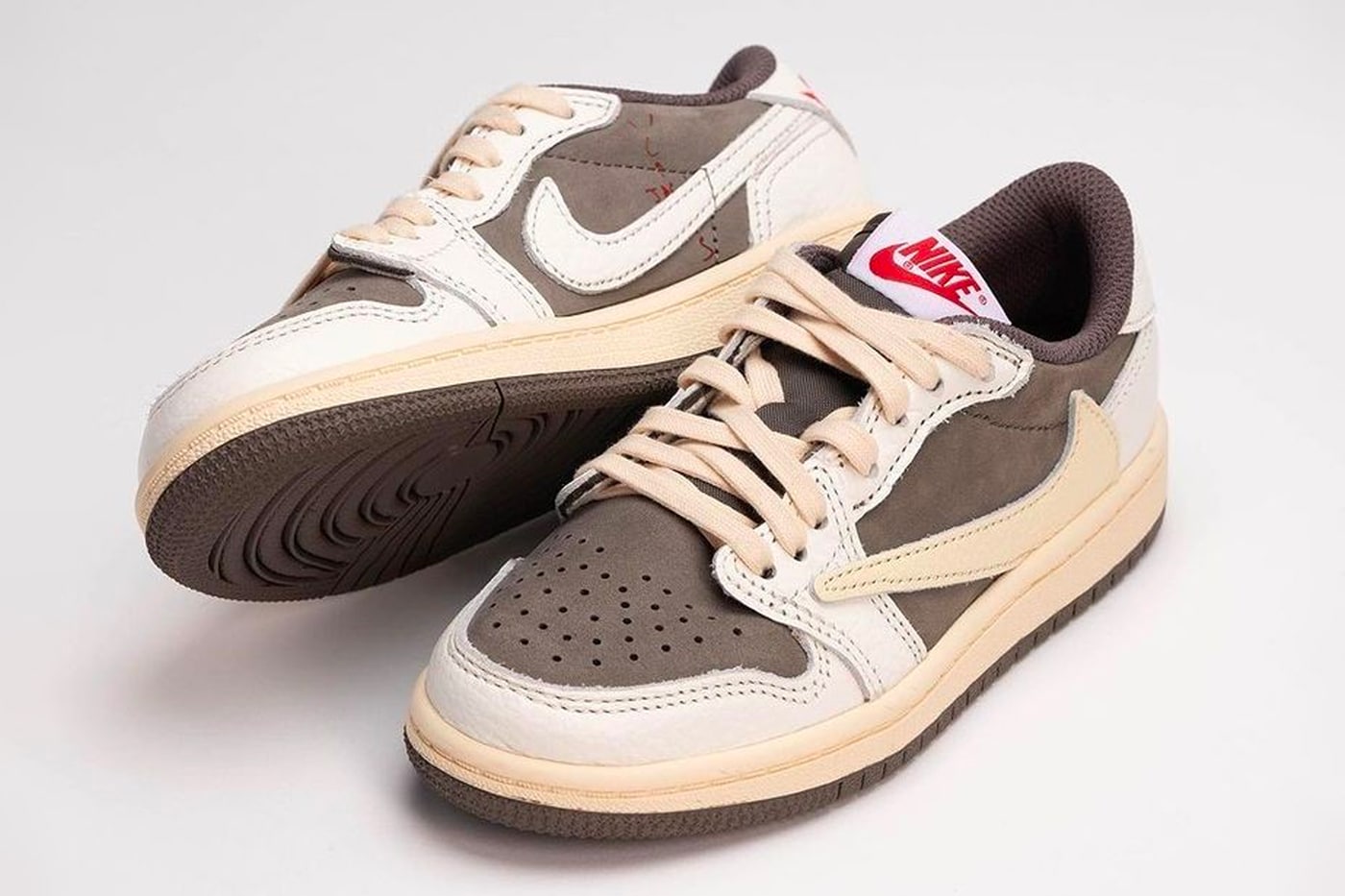 Starting off with the biggest grail of 2022 so far, we have Travis Scott’s comeback sneaker in his collaborative effort with Nike and Jordan Brand. While the rapper originally made his comeback on his takes of the Air Max 1 and Air Trainer 1, his third version of the Air Jordan 1 Low was certainly the most special.

The sneaker had already appeared on social media through leaked images and early in-hand pairs months before the Astroworld frenzy in 2021, but the release was thought to be canceled due to the disaster at the rapper’s festival and Nike’s unwillingness to continue their collaboration. However, after dust settled, the duo went on to release one of the most beautiful and well-curated sneakers of the decade: the Travis Scott Air Jordan 1 Low Reverse Mocha. The reversed iteration of the 2019-released Mocha, and a definite improvement to the older brother. As the name suggests, the sneaker reverses the original Mocha’s colourway, resulting in a brown nubuck leather base, with white leather overlays. A yellowed reversed swoosh and midsole add that vintage aesthetic, providing a luxurious look and feel. Besides the obvious reversed swoosh, smaller details on the upper remind wearers and observers alike of the rapper’s influence in the design: Jordan logos embroidered in a fierce red, one heel logo replaced by a Cactus Jack emblem, a red Cactus Jack cross-logo embroidered on the medial foot, and an insole that’ll get you excited every time you put on your sneakers.

You can check out all the aesthetic and comfort features in our hands-on blog here, but besides the beauty of the shoe, the limited quantities of release make it almost impossible to get your hands on a pair. Worry not, since we have you covered: The Travis Scott x Air Jordan 1 Low Reverse Mocha is available online and in-store today!

Nike went crazy in 2020 during the surge of their Dunk Hype. Along with Travis Scott’s take on the silhouette, the US-based athletic conglomerate teamed up with dozens of collaborators on special versions of the beloved shoe. One of the most unexpected and impactful partnerships was world-famous ice-cream manufacturer Ben & Jerry’s. Known for their delicious (and satiating) ice-cream tubs with creative names and comedic designs, the Vermont-based brand decided to cover the Nike SB Dunk Low in their theme. The “Chunky Monkey”, a banana-fudge-walnut mix of deliciousness served as the inspiration for the latest shoe: the Ben & Jerry’s x Nike SB Dunk Low “Chunky Dunky”. Cleverly incorporating the silhouette’s name into the mix, the duo was set to release one of the most talked-about sneakers of the decade.

Instead of just slapping their logo onto a readymade design, the team actually took the time to carefully craft the sneaker into an ice-cream product. A green-blue leather base sets the backdrop of a field in the blue sky, while overlaying faux cow-fur provide the feeling of sitting atop an Alps-mountaintop enjoying the view. To add the ice-cream signature, the yellow swoosh features dripping elements, representing a melting ice-cream during your sunniest days. The sneaker was timed impeccably to appeal to the masses. A slow roll-out of hints towards the collab, leaked images, and teasers from the ice-cream brand got fans excited for months before the sneaker finally released. The most-talked about silhouette at the time, dressed in the most famous and beloved ice-cream brand in a beautiful way, with colourful details and vivid finishes, special release-boxes, drop events and more ensured that the collab instantly reached grail status for the masses, with resell prices soaring through the roof.

Any person with social media affiliations will instantly recognize the sneaker, and even those who don’t know the difference between a Dunk and a Jordan 1 will notice that you’re wearing something special.

Droolworthy, mouth-watering, I scream for this ice-cream! Available now online and in-store at Drip Drops!

If you thought that Travis Scott’s most impactful and influential sneaker of all time would never land in your cupboard, you may have thought wrong! We got our hands on this work of art, ready to be worn on your feet or displayed in your glass-cabinet. In 2021, news of a potential collaboration between Hiroshi Fujiwara’s fragment design, Travis Scott, and Jordan Brand emerged, and the sneaker world went crazy. Although there was a lot of doubt at first, some on-feet pictures of the Houston-born rapper quickly cycled through social media to get everyone’s hopes up.

After months of leaks and hints, the official collab was announced, and it was more than anyone could ever hope for. TWO takes of the most impactful sneaker names on Air Jordans: an AJ1 High and an AJ1 Low. While the latter was more coppable, both sneakers were impossible to obtain for retail, marking one of the most frustrating sneaker releases to date.

The Jordan 1 High was unarguably the most demanded. A blend of the 2014 fragment design Air Jordan 1 – an ultimate grail for long-time collectors – and the 2019-released Travis Scott Air Jordan 1 Mocha, gave birth to the perfect sneaker. A fragment-Blue leather base is covered in elements of off-white leather, with black elements found on the ankle and signature reversed swoosh. A yellowed midsole and blue outsole complete the base of this unprecedented collab and beautifully-finished sneaker. To add more touches of the collaborations, details of Cactus Jack can be found in the form of an embroidered CJ logo on the left heel, a logo on the tongue, and the obvious reversed swoosh on the lateral foot. Fujiwara signed his name in the form of the fragment double-lightning logo on the right heel, mini-text on the medial foot, and his signature blue tone on the upper paneling.

It's one of the biggest sneaker grails of all time, a collaboration nobody expected, and still cannot fathom today. Overlooked by no one, forgotten by few, a shoe for history books. This is it. The final epitome of streetwear and luxury combined. The ultimate grail. The most talked about shoe of the decade. The most recognized sneaker combined with one of the most renowned luxury houses in the world. Dior’s take on the Jordan 1 High.

The last five years saw a shift in the distinction between streetwear and luxury fashion. Blurring the lines between the two industries started with Supreme’s renowned partnership with Louis Vuitton, which set the grounds for what was to come: Gucci x Adidas, Balenciaga x Gap, Off-White x Nike, and of course Nike’s duo with Dior. The latter saw a collection of apparel and accessories, only purchasable as a repeated customer at the French luxury fashion house. 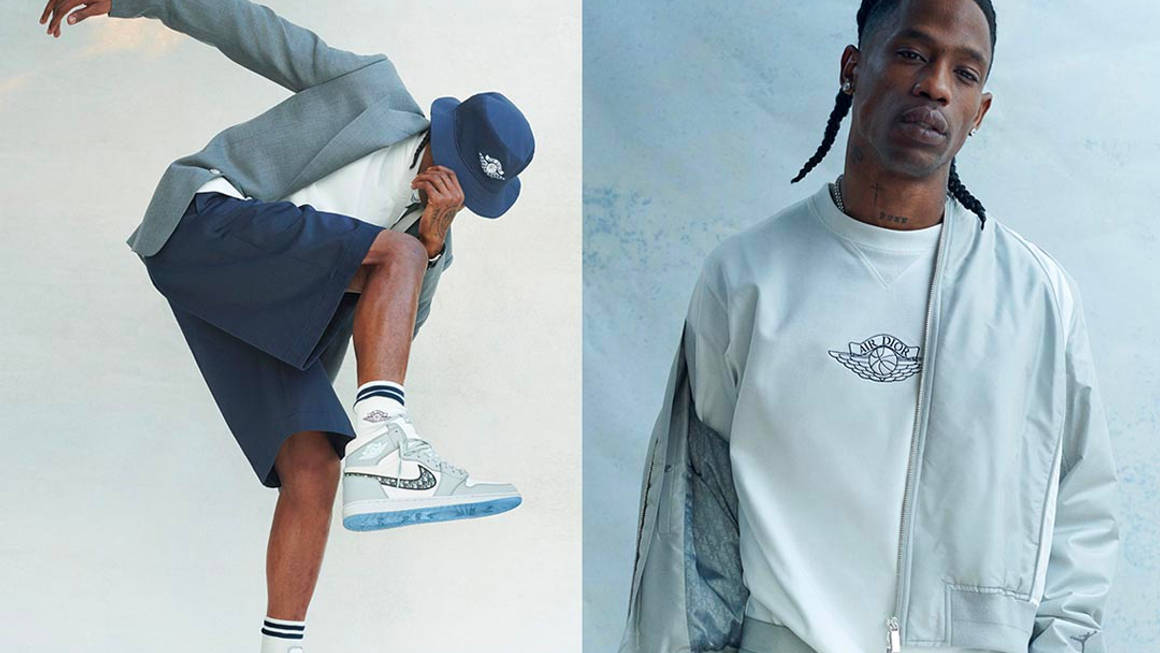 Along with the collection, two sneakers in collaboration with Nike saw perhaps the most exciting and groundbreaking sneaker drop ever. The Dior x Jordan 1 in a High and Low iteration. Once again, the classic AJ1 overshadowed everything else, with hundreds of thousands of sneakerheads signing up for the raffles… for 8000 pairs. Rest assured that the majority of the pairs ended up at friends & families, so the chances of actually obtaining the VIP-passes to cop were close to negligible. Resell prices went above the €15k mark insantly, people went on world-trips to find sellers, only celebrities were really seen wearing the shoe.

Now, two years later, the sneaker is still apparent in the game today. Resell prices haven’t dropped, and major celebrities are still seen wearing the sneakers on special occasions. There isn’t much to be said about the design, it’s Dior’s signature on the Air Jordan 1, an oversized monogram-swoosh, and Air-Dior logo as an adjustment to the Wings logo, and the entire sneaker being handcrafted with luxury Italian leather. While this implies that this may be the highest-quality Air Jordan 1 to ever be manufactures, there is still no justification of the 2.000€ retail mark, or the 15.000€ resell prices we are still seeing today.

Nevertheless, it’s the ultimate sneaker, the most wanted, most talked-about, most impactful, and most historical collaboration on the Jordan 1 High ever. The epitome of luxury and streetwear. And it’s available both online and in-store at Drip Drops. Have some cash lying around? Secure your most treasurable shoe of your life right now!

Which sneakers are you still endlessly searching for? Let us know in the comments below.